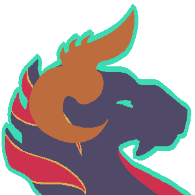 I am so glad people are enjoying these so far! ❤️  So courtesy of the ever wonderful Spatio, I have a beautiful ref to post for you all!        Aight so these bad boys are all about their pride and battle culture. They are constantly striving to prove their worth in battle, hoping to live up to those they revere as war deities and forever striving to surpass them. While other breeds can sometimes garner their respect, nothing will truly top a Pitfire that has gone
Recommended by Kaini
Go to this post

This topic is now closed to further replies.
Followers 9
Go to topic listing