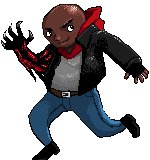 Halo: The Holy Deceit, The Fight For Amnesty

By rabidminimoose, August 22, 2011 in Other Role Plays